Aurora is a tabletop roleplaying game for 2-6 players. This game is deliberately designed to be played comfortably while practicing social distancing or together around a communal table when the necessity for distancing has ceased.

Your story is built and told in three modular phases:

1. Crafting a unique deck of Oracle cards through the mail, using your friends zipcodes to randomize prompts and elements of your illustrations. Phase I is available as a free demo as part of the Step Up for the Postal Service game jam.

2. Using those cards to build a flawed City corrupted by Darkness and populate it with hopeful citizens who aspire to overcome those flaws with Light.

3. Acting out the story of the overcoming of darkness in favor of light, using your characters and cards from prior phases to bring hope and revolution to your world.

To play, you need a few friends, some paper or note cards to write and draw on, and a method to communicate.

Aurora is available as a high quality printed zine at worldchampgame.co/store. This game was made possible by supporters at patreon.com/worldchampgameco in May 2020.

UPDATE April 2021: Since many of us are receiving our vaccines and hopefully will be able to return to in-person play, I made a free deck you can use to skip or supplant Phase I! It is listed as a free demo here so you can use the cards even if you haven't bought the game yet or if you just got the zine at my store. Available as a two-sided print PDF and as individual card PNGs for uploading to Roll20 or other virtual tabletops.

In order to download this modular story game you must purchase it at or above the minimum price of $6 USD. You will get access to the following files:

Support this modular story game at or above a special price point to receive something exclusive.

Recently finished playing all three phases of this game with friends over discord voice call (three sessions, five players total), and it was a TON of fun!

We used a shared painting canvas app for Phase 1 to draw, name, and embellish our oracle cards in real time*, so we completed our deck in roughly two and a half hours. We ended up with some very unique cards, which had a big influence over everything in the following phases!

Phase 2 required some advance prep to set up a custom tabletop (we used playingcards. io, with custom card fronts), but it took us less than two hours to craft a whole city and cast of characters from our oracle cards. I really enjoyed how all twenty cards got used in making our ten characters.

Our final session for Phase 3 was a little more intense. Even with a timer running to keep scenes from getting too long, we still spent three hours in this session since deciding on a concept/location/roles for each scene usually took more time than we planned for. But I think it was worth it, since we weaved together a very flavorful story involving magic spice and uprising in our fantasy city.

Thank you for putting together this neat game! My personal favorite things about Aurora were:
1) the division of the phases – with friends in different timezones it was easier to schedule three regular ~2.5 hour game sessions than it would've been to set aside time for a big ~6 hour session, and each session ended on a satisfying note
2) how big of an impact our oracle cards had on our story's foundation and direction. It made everything feel super personal, and I can't imagine telling the same story with a different deck of cards or a different set of players.

* What worked for us was to let two players simultaneously take their turns drawing + labeling. The other three players embellished cards while waiting for one of two active people to finish their turn and pass it to the next person in our turn order. This kept us crafting cards at a good pace.

I've played this game with a friend twice and both games were really fun!  I got the game in the Racial Justice bundle a couple of years ago but I came back to buy it properly since we got so much use out of it.

We used tarot cards instead of making our own oracle cards, and the different tarot decks added a lot of flavor to the settings. The two cities turned out very different!

Our playtime was waaay longer than the game text suggests - 4-5 hours to build the city and characters (even though we only made 6 characters), plus a second session of 4-5 hours another day to play the story. We're both worldbuilding nerds though, and ended up making fantasy cities with magic and politics and so on; it took some time to make sure everything tied together. We had a lot of fun bouncing ideas back and forth and coming to a consensus.

I highly recommend this as a game, and it would also be fun to brainstorm/outline a book for nanowrimo etc.( You'd still probably want a partner though, I think.)

One suggestion in case there is ever a second edition - on our second playthrough we really wished for more options in the "A Place of..." table for generating locations. 12 prompts instead of 9 might be easier to work with. E.g., Near the end we just went ahead and added "Cycles" to our game for a garbage dump/waste processing center (debated "Life & Death" or "Renewal" as alternatives). Just a thought!

thank you so much! I have used this game the last couple years to elaborate on worldbuilding stuff for my other games and really enjoyed it. I might revisit the location stuff and see if there’s any new life I can breath into it. Thanks again!

Do you have any suggestions for amount of actions per turn  or total deck size if attempting this with 8-10 people?

um, I don't! in phases 2 & 3 I'd say that's too many players for it to work correctly. If you're just doing phase 1, a 10 people could do 2 actions each and have a deck of 20 cards, for 8 people do 3 actions each and you'd yield a 24 card deck. In all versions, each player will have the cards-in-hand at least two times to get a Label and Art on every card.

thank you for this information!

Aurora is a GMless, setting-neutral, multiplayer rpg about a group of characters overcoming adversity.

It's also a collaborative, crafting experience where you create your own tarot deck and then use it.

Aurora is 24 pages, with a lovely oil-painted cover, excellent layout, and some chaotic but very atmospheric backgrounds and illustrations. Visuals-wise, it's super polished.

Mechanics-wise, Aurora is broken into three connected mechanical packages. The first is a play-by-mail deck creation game. The second is a card-tile-based city builder. The third is a more conventional, character-driven roleplaying game that's nevertheless quite mechanics-light and narrative-y.

If you wanted, you could stop at any phase and have a custom tarot deck or a collaboratively built city under strain. By that same token, you could swap out Aurora's mechanics for the third part and replace them with something more dungeon-crawl-y. Aurora actively encourages this, and it gives you a lot of guidance throughout on how to hack it.

If you're here for crunch, Aurora does not provide a ton on that front, and you'll have to add your own. But with that said, Aurora is extremely well put together, and it may be worth a look even if it's outside of what you'd usually play. 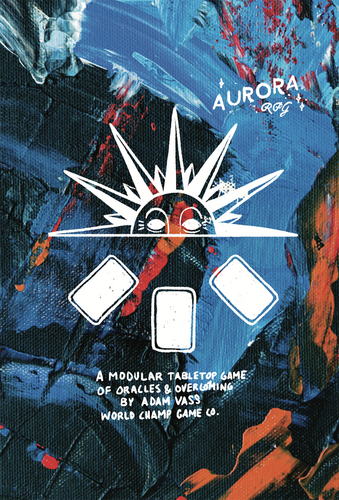 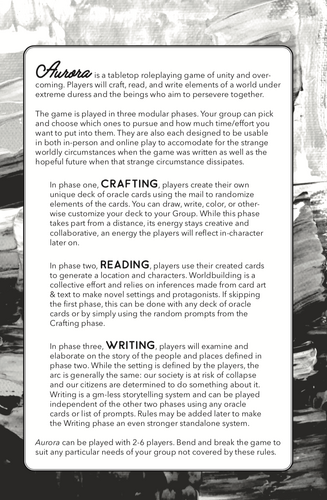 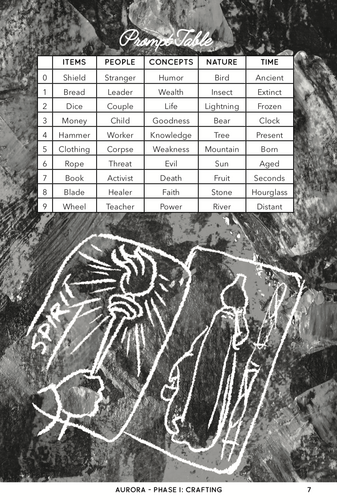