The weird machinery of the phantasmagoria sparks awake. The lantern-bearer braces herself against a broken pew, supporting the weight of the magic lantern against the rotten wood. Out of its flickering lens dances a ghastly projection. A phantom, this one with a bark and iron crown, wings made of thread and voice of vinegar. She and her gathered revolutionaries brace back, readying to enlist this revenant to their cause. They are one step closer to overthrowing the Ancien Régime, this time with a spectral guillotine. These are their secret stories. This is a guide to casting phantoms in the revolution.

By Adam Vass and Will Jobst

A Guide to Casting Phantoms in the Revolution is a single-session roleplaying game, in which players work together to summon specters to fight the aristocracy during the French Revolution. Featuring the pentacrawl system, Guide is different every time you play. Played on a story map in the shape of a pentagram, create a cast of characters, interpret symbols to create unique moments, and have the phantoms do you bidding—or you’ll do theirs!

• hi-res files of the playmat, scene and character cards for use in online play.

In order to download this game you must purchase it at or above the minimum price of $15 USD. You will get access to the following files:

BTW the product page has a typo - "do you bidding" should be "do your bidding."

Guide is an extremely cool storytelling game with an almost ritual feel to it.

It does some things mechanically that some groups may have strong feelings about (no one plays a single character, characters are shared between the group,) and it partly relies on a physical prop that comes with the game (a lantern that the group interacts with,) but it's still playable online, and if there's mechanics that don't work for your group, those parts can pretty easily be recalibrated until you're comfortable.

This is worth doing, because Guide is a flavorful setting with an excellent premise. I honestly didn't know I needed French Revolution Persona until I read it, but now that I have, I do.

That said, Guide is quite mechanically complex, and the mechanics often have sort of an odd feel to them, like they're as much divination as they are math. Even if you're used to high mechanical complexity (Shadowrun, Exalted, Eclipse Phase,) you might need to read through things a couple times, or test-play through some of the sequences before you explain it to your group.

The Phantoms included in the book are super neat, and well-described, but there isn't as much data about revolutionary France. The book pretty strongly suggests you don't worry about historical accuracy, but some background knowledge is probably not going to hurt the flavor as long as you're not using it to contradict and penalize other people in the group.

Overall, if you like complex mechanics, storytelling games, and a historical occult milieu, give this a shot.

If you're not a huge fan of the above, the phantoms section is still really cool in its own right, and may be worth checking out anyway.

Looks super fun! Do you think you could provide the hi-res Guide cards for online play as individual PNG/JPG files instead of all together in a single PDF? It's hard to do anything with images from a PDF.

yes! good call thank you. I'm a noob for online play and didn't realize how unfriendly print files would be. I should be able to do that this week.

Thank you! I'm planning to use Roll20 3D dice to get the pattern on the playmat, and I'll post a review here with the online experience after the game!

just uploaded that PNG set as a compressed folder, let me know if there are any issues with it! 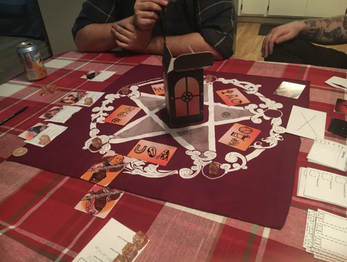 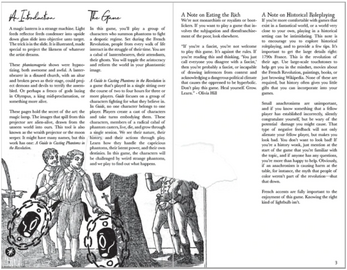 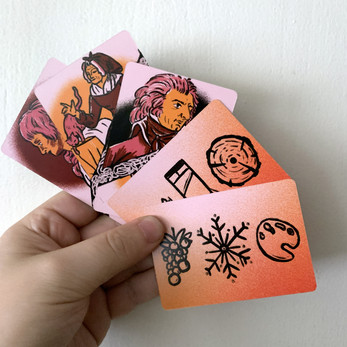