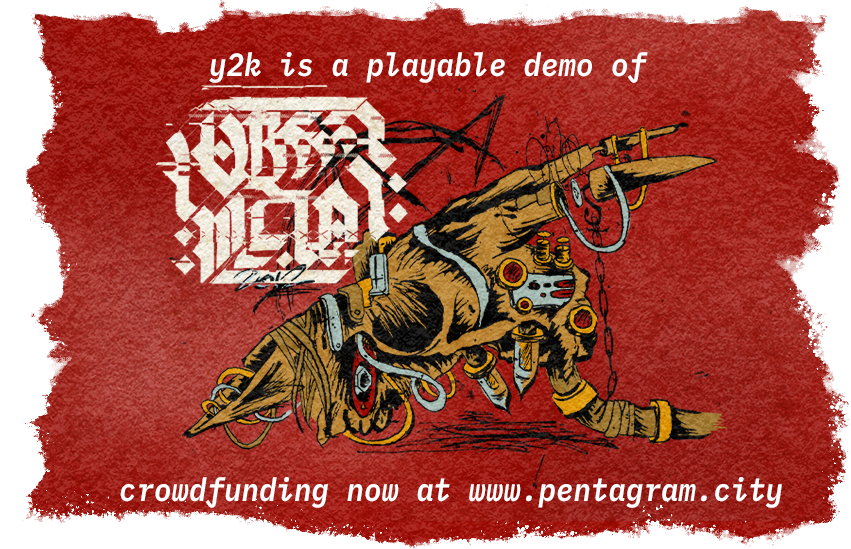 y2k is a playable slice of Cybermetal 2012, available for preview and pre-order now at pentagram.city. you do not need y2k to play Cybermetal or vice versa!

Demons, humans, vermin, and husks band together to survive in a city that doesn't care about them. Perform dark rituals, take drug trips, take down mutant fuckers, press your consciousness to a vinyl record, and much much more. y2k shares mechanical and setting DNA but is a distinctly separate experience. 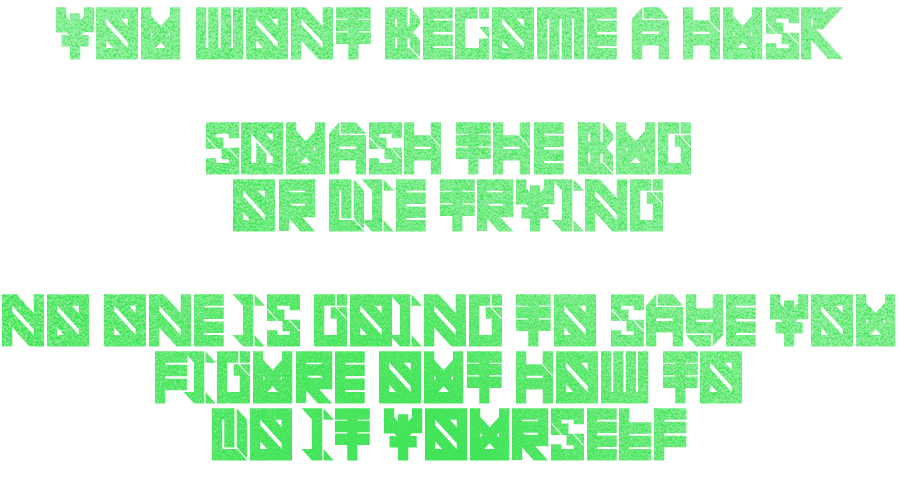 Pentagram City still crawls with demonic ichor flowing through the drains for the years since the Hell War.

The Exodus left us alone and encapsulated, a society left to fend for itself in total isolation from the outside world for better or worse.

When the clocks tipped to 1/1/00, we lost what few digital escapes and resources we had, replaced with violent programs and braided cable tendrils on every street corner reaching out to harvest aloof human hosts for their digital minds.

Y2K is a roleplaying game for one player and one gamemaster (GM). In it, the player acts as a human citizen of Pentagram City in pursuit of The Bug, a digital fucker wreaking havoc on the warped physical world around them and implanting artificial intelligences into human hosts (called Husks). Through clever tactics and/or stupid risks, navigate the Wired District, avoid hellacious Demons and Husks who aim to annihilate you, and take down the computerized menace that threatens to eradicate humanity from the region. 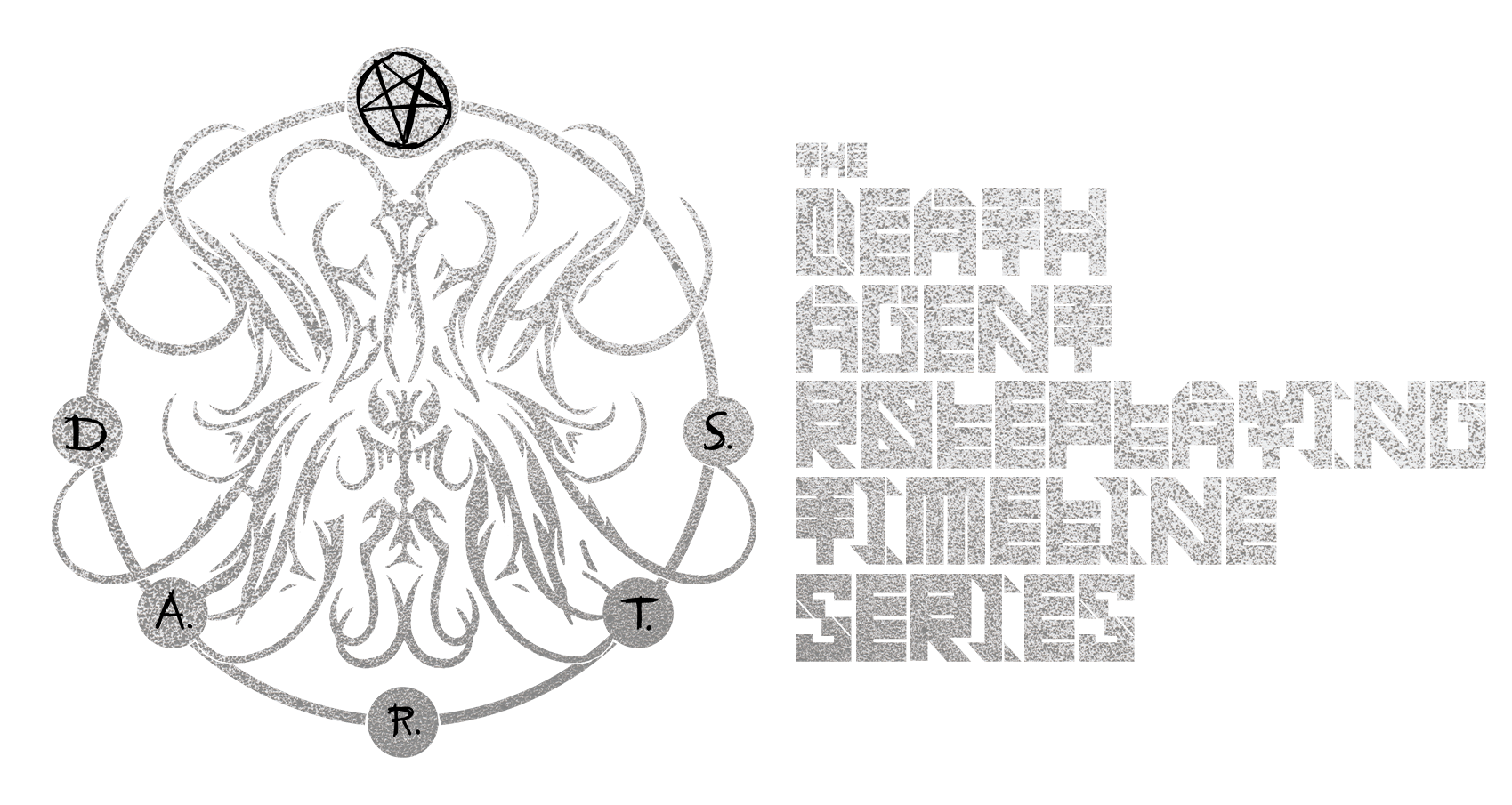 Y2K is a game in the Death Agent Roleplaying Timeline Series (D.A.R.T.S.), meaning it shares history and lore with a number of other published and forthcoming games by Adam Vass set in an alternate timeline. This game acts specifically as an abridged preview and prequel to CyberMetal 2012. While this game uses similar mechanics, aspects are subject to change. For more CyberMetal 2012, visit www.pentagram.city, and for the ongoing development of D.A.R.T.S.,
visit www.worldchamp.io.

Edit: I missed a couple key details in my read. They're clarified in the comments below.

Y2K is a prelude to the upcoming feature length TTRPG Cybermetal 2012. It's also an extremely strong release in its own right, and a great 1 player, 1 GM game.

The PDF is 16 pages with a great low-fi technical manual feel to its layout. Everything is clean and readable, but if this aesthetic were a movie, it would have VHS scanlines. It's a neat look.

Lorewise, in Y2K you play as a regular human on an earth that has been overrun by the forces of hell. It's the year 2000, there's no government, and demons and humans live mostly side by side in the only city you can get to. Guns have been made useless ever since people learned how to modulate the frequency of their consciousness, and people can install computer software into themselves for personal advantages.

Also a freeroaming computer bug is installing hostile AIs into people. Your task is to find and eliminate it.

Despite this Doom-y sort of setup, you're not particularly strong stat-wise. You have the sorts of abilities a normal person who lives side-by-side with demons would have, but you're not exactly an engine of rip and tear.

Y2K runs on a d100 engine, and your skills start at 50% and most don't go over that. To compensate, the game gives you a lot of leeway in how to apply your skills. Generally, as long as you can make a case for why a skill fits a particular task, you can use it.

Still, basic rolls in Y2K are a little more complicated than in typical d100 systems. You succeed/fail/crit on your d100 roll, but you also roll a d10 afterward for fallout. Fallout adds complications and bonuses irrespective of whether you succeeded or failed. So you can crit a roll, but also the situation slips further out of your control at the same time.

Combat feels a little hectic as a result, but you have lots of room to back down and go heal up. Hit Points are handled via Charge---a 0-100 system where taking damage at 0 Charge means death---but re-Charging is as easy as going back to your home. Damage is typically a d10.

Scenario-wise, Y2K comes with a tight map and a series of encounters that you can face while chasing the Bug. It feels OSR-y but also a little unfamiliar in a good way.

There isn't a specific chapter of GM resources in Y2K, but the game as a whole feels pretty GM-friendly. If you've GM'd Eclipse Phase or BRP or anything OSR, you should have an easy time here.

Overall, Y2K is sort of a teaser for the absolutely wild setting of Cybermetal 2012, but it's also a great standalone game. If you want something that feels partly cyberpunk, partly occult, partly like Doom set in an apartment block, I'd strongly recommend giving this a try.

-Page 5 mentions "gaining advantage," but it isn't spelled out if this works like advantage in 5e. Disadvantage is clarified on the next page.

Thanks for another awesome detailed review! Just a couple points of clarification:

the d10 for fallout or damage are not separate rolls but instead chosen from the 2d10 that make up your (physical) d100 roll. So lower rolls mean success but a hard choice, whereas failure usually means things are gonna get worse.

Advantage is detailed in the dice exceptions section which is a bit small in the zine, the lower result of the 2d10 is used as the first digit.

All this will of course be explained more deeply in cybermetal!

Dang, I missed those in my read.

I absolutely dig fallout being tied to your regular roll dice.

I'll put an edit at the top of my review.

just plugged in. don't try calling, you'll get a busy signal as i'm currently dialed up. extract all from radical_H3LL.zip

Low bit rate, high style. Cybermetal 2012 is viciously hacking its way to the top of my anticipated_Games.txt file, and y2k gives me a chance to download a compressed packet of that awesomeness directly into my brain. 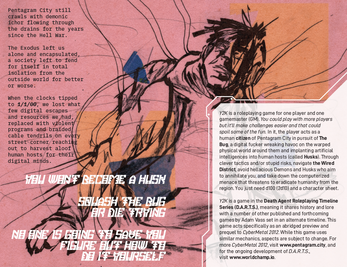 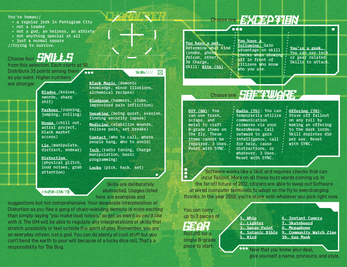 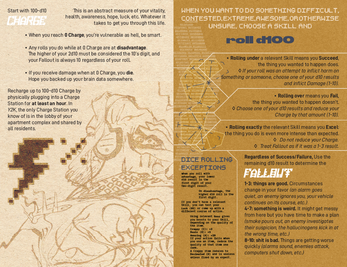